With the purchase of my pewter-and-horn mounted kingwood pipes, very similar to the Waterloo set from c. 1715, from Al Saguto in October 2006, my period piper kit got a lot more accurate, and I got a great set of drones. But they were chanterless! I had a Hamish Moore 440 chanter, based on a late 18th century source, which I quite liked, and played with them for a while, but the wood was wrong - it was African blackwood, which would not have been available to an 18th century piper. I needed something in a brown wood that would either be native to the British Isles, or would have been available through the existing trade routes. In discussions with Collier Hyams, I learned that kingwood was known to instrument makers in the 18th century (though there was no indication it was used for pipes), and kingwood would at least pass for something more appropriate, and was already the wood the drones were in. 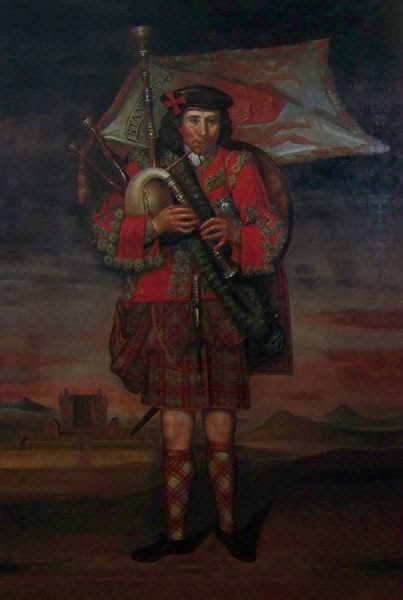 The consensus among scholars on the chanter in the portrait was that it is totally fanciful; the chanter appears to have a bell on it, which is inconsistent with any known Highland chanter of the period, and it doesn't narrow toward the high end, before expanding again into the bulb.

But I took a closer look. The latter criticism is legitimate, but perhaps can be chalked up to artistic license. But the former doesn't seem to hold up: the "bell" joins the chanter not at the top of the flare, but two thirds down its length. And I concluded that the "bell" was actually a pewter sole turned in the shape of a bell, not a bell at all.

So I asked EJ Jones, the piper who inspired me to take up the instrument in the first place, and who had previously made me a set of smallpipes (his third set ever!), to turn me a chanter out of kingwood to match the wood in my chalice-top pipes I bought from Al Saguto. Here's the concept art I sent him.

The small band between the D- and E-holes was inspired by a different chanter entirely, the one from the "Speckled Pipes of the MacCrimmons", but the bottom band is definitely visible on the Waitt portrait.

EJ suggested we move the larger band below the tone-holes to between the tone holes and the A-hole. Of course, I was asking EJ to learn a whole new skill, the turning of pewter, and there were... complications along the way.

So first EJ turned the chanter blank, which he sent me to play for the June 2008 Celebrate Fairfax and several other gigs.

During this time, EJ got to learning about pewter. His first attempt at turning leaded pewter was a disaster, with lead dust everywhere, and I ran back to the previous owner of the drones, who was the one who removed the nickel silver and had the pewter mounts added. He confirmed for me that he used a lead-free pewter, which was consistent with what EJ was learning in his own research. Eventually, and with great effort, he figured out how to cast and turn the pewter. He gave me a call, and I returned the chanter to have it mounted.

EJ put on the bulb and sole, but not yet the band, and got me the chanter just after St. Pat's, 2009; and I have been loath to part with it since. Here's the beauty herself:

When he gave it to me, EJ indicated he had (in the year since he turned the body of the chanter) changed his design for 440 chanters, and suggested starting over on the wood before adding the third band. It being a still perfectly good chanter, I offered to work out a deal where I would buy two chanters; one mounted with a pewter sole, bulb, and band, and the old chanter mounted on sole and bulb in a material TBD. Bone was discussed for a while, but in the end, he just copied the pewter from the old chanter for the new.

Here, I'll leave the telling of the tale to EJ. Here's his first entry on the making of the chanter, and here's his second.

So by early March, I should have both chanters, and another surprise. More later.

Update: There has been a bit of a snag.

Okay, so April it is!

It's been even longer...

So things are taking off with the Devil's Tailors, and my solo site has languished. I've had many gigs, a bunch of new instruments, and a lot of new experiences.

But until I have time to get truly caught up, here are three performances from me at a Burns Supper on 1/23/10: