And now my latest toy...

EJ Jones built a set of border pipes for me, based on an 18th century example from the Mopreth chantry museum. The originals were made of sycamore, brass, and ivory, so that's what he made these from. 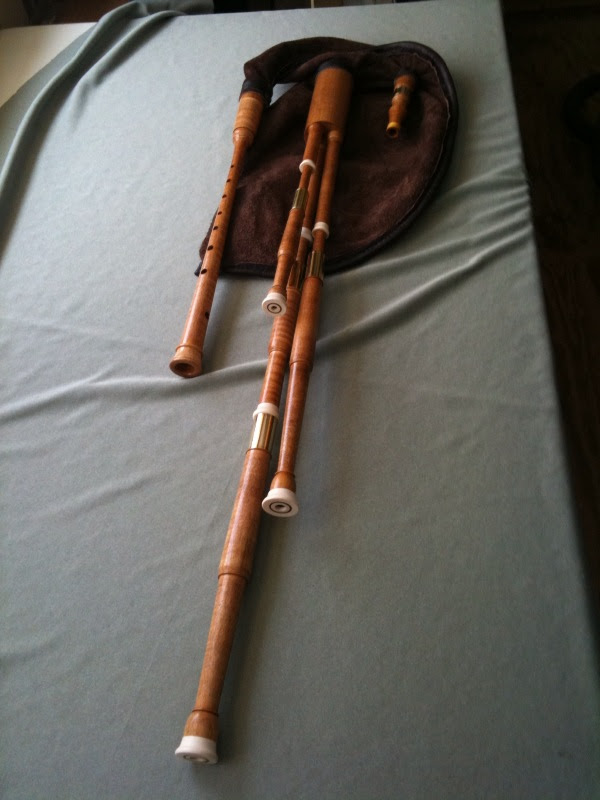 I had him make me a spare tenor-A drone, so I could set up with 2 tenors and one bass (like the pipes in the photo), or tenor, baritone, and bass (like the usual border pipes); but only had 3 holes drilled in the main stock. They are illustrated above in the latter configuration.

These pipes are gorgeous, and they sound great. I debuted them at The Royal Mile jam session last night, and they were a lot of fun to play. I will probably use these for reenacting, for tunes where I need to sing while playing (hard to do w/ the Highland pipes), and for jam sessions.

They're not quite done. EJ is going to produce a more decorative main stock for me, and I will likely spend the extra bucks to get ivory put on it, and on the chanter stock, like the originals. He's also finishing up the bellows (I played with my smallpipe bellows last night).

More pictures once Jay Ford gets the chance to point his camera at them.